Benfica striker Darwin Nunez has a lot of work to do when his Liverpool transfer is confirmed officially in the coming days. 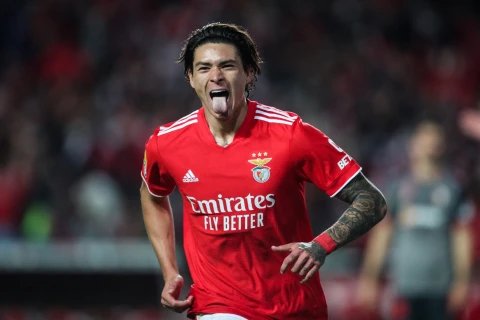 The 22-year-old is expected to be the first summer signing at Liverpool after the club agreed a deal to sign him from his Portuguese team. Nunez caught the eye when he scored against Liverpool in each of the two legs in the Champions League quarterfinals. The Uruguayan international found the back of the net with the lone Benfica goal during the 3-1 loss at home to Liverpool in the first leg, before scoring one of the Benfica goals in the 3-3 draw away to Liverpool in the second leg with the Reds moving into the semifinals via a 6-4 aggregate win.

It is inevitable that the aforementioned Nunez would be compared with Luis Suarez and Fernando Torres when he starts his Liverpool career. Also, he won’t be helped by the reported £68.3m fee agreed for him, add-ons excluded. Fernando Torres and Luis Suarez are the template for a successful striker at Liverpool in recent times thus leading to the question of whether or not Nunez can emulate them with his performances in Merseyside.
Liverpool paid around £20m to sign Fernando Torres from Atletico Madrid in his native Spain and he went on to become one of the best Liverpool players in the Premier League era. He reached a very good level at the club before leaving to sign for Chelsea in a controversial transfer.
For Luis Suarez, Liverpool paid £22.3m for the Uruguayan and he repaid the money before signing for Barcelona in a £75m deal. He was at Ajax Amsterdam when Liverpool identified and signed him to replace Torres in January 2011. He left the club for Catalan giants Barcelona shortly after the 2014 FIFA World Cup in Brazil.